With Episode II rightfully flattened last week, we move on to round 2 with Episode I still standing on top of the hill!

For details of how this king of the hill battle works, please check the previous post here.

Episode I: The Phantom Menace

versus Episode III: Revenge of the Sith

Why Episode I Lost:

In The Phantom Menace, George Lucas tried much to hard to create an overly complex story with elements that left the audience asking, “why does this matter?”  The characters were wooden and all the banter and connection felt in the original series was destroyed by his need to over tell the story.

As to Anakin, all that needed to be said was, “I’ve never felt such a strong presence of the force.  Even from a fully grown master.”  We don’t need midichlorians, or associations with Jesus.  Please.

“He’ll bring balance to the force… by dying for all of our sins…”  Ugh.

The empire was a vast, overpowering, tyrannical machine that suppressed the people.  That is a theme almost anyone can understand and sympathise with.

A trade dispute, on the other hand, sounds petty and, well, just boring.  Grand Moff Tarkin was a man one could respect as a serious man of purpose.  Viceroy Gunray is a douche.

2. Baby Anakin Is Even Worse Than Teenage Anakin.

“Cho skrunee dopat, sleemo.”  Yeah… Almost everything Anakin said in Episode I is cringe worthy.  “Are you an angel?”  “I wouldn’t have survived this long if I wasn’t so good at fixing things.”  “Yippee.” 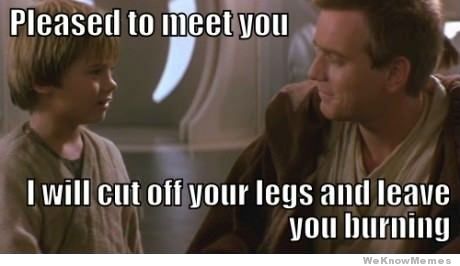 Many people have tried to blame this on Jake Lloyd and that is unfair.  The assumption has been, “It can’t be George Lucas’s fault.”

Yes, it damn well can be.

This was quite possibly the worst child acting I’ve seen in all my years of watching films.  But I have to also admit that it’s the worst performance I’ve ever seen by Ewan McGregor and Natalie Portman as well, an actor and actress whose body of work is incredibly impressive.  So, if two Oscar level actors appear unable to act… who is to blame?

The douche bag who spent too much time obsessing over the sound effects and flashing lights.

Little personal note to Mr. Lucas:  No one gives a flying shit about ship noises.  Well, no one but you.

3. Stealing, absolutely not.  Gambling with a child’s life?  Sure.

Oh no, the hyperdrive is broken!  What will we do?  They land on Tatooine.  There’s a slave holding scumbag that has one… but mind tricks don’t work on him (making his race equal to

Hutts… which begs the question, why not just use a Hutt instead of increasing the number of beings impervious to mind tricks??).

Stealing the hyperdrive was out of the question.  They were on a Hutt controlled planet!

With two Jedi, I find it hard to believe they couldn’t have worked this out.  Then, to assuage your conscience, you bring back a brand new one when you are finished escaping with the queen.

Nope.  We are going to gamble with a child’s life in a race that leaves many people dead.  That is much more sensical.  Que the, “Who needs logic,” soundtrack.

4. “I’ve Got the High Ground” Only Applies to Good Guys.

Darth Maul was awesome.  He was intimidating, fast, and totally fit the role of series bad guy.  Then he died… in the stupidest way possible.

I contest that one of the major faults of the prequels was their lack of a consistent bad guy.  Think of what having Darth Vader for three films did.  It built his character slowly, showing you different sides of him and made you grow to dread him while at the same time secretly respecting him for his badassery.

Every one of the prequels had a new ‘sidekick’ to the emperor…and they are increasingly lame.

So Darth Maul kills Qui-Gon and then Obi-Wan rushes in, all filled with rage and hate, and fights him like a serious bad ass.  That sequence is by far the best lightsaber fight ever captured on film.  The successive films lost their focus on how to film these well and they sucked.

Then Obi-Wan gets knocked over the side of the vent, loses his lightsaber and is hanging on for dear life.  Darth Maul toys with him a bit and, somehow, can’t sense that Obi-Wan is reaching out for his master’s lightsaber (some force user Maul was… despite how well he fought UP to that moment)

Then what does Obi-Wan do?  Leap straight up in front of Darth Maul, flip over his head, land behind him and cut him in half.  And Darth Maul… never… moves… a…. muscle.  A force user who proved to be impossibly fast couldn’t think to even put his blade out, which is all it would have taken.

This is made even more ridiculous when you factor in that, having the high ground (as Maul did) is the VERY THING OBI-WAN USES TO DEFEAT ANAKIN! 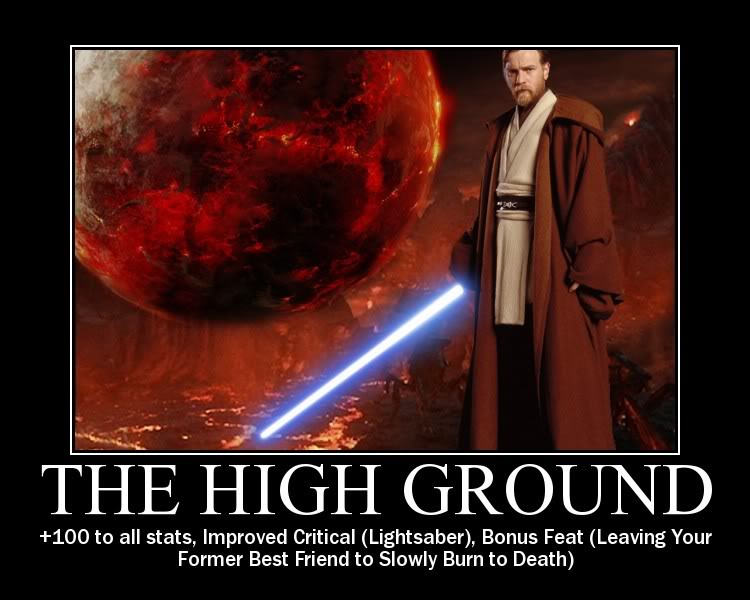 5. All The Wacky Antics.

I am not going to blame this all on Jar-Jar.  That character was a mockery in and of itself.  Many people felt the same vitriol toward C-3PO when the original series came out though.  Likewise for the Ewoks.

George Lucas, and I am certain he gets this from his buddy, Mr. Spielberg, loves to create childish and stupid characters to play the comic relief.  Then have th

em do stupid things stupidly to lighten the mood.

I don’t really like  it when Spielberg does this.  I hate it when Lucas imitates it.

Jar-Jar was the recent version.  As were the battle droids.

Riddle me this, what good did it do for the movie having stupid droids?  Why does that even make sense?  It’s a robot.

Unfortunately, so was most of the movie.

Honorable Mention:  Jedi’s are supposed to be tranquil.  Anger leads to the dark side, right?

Why the hell was this clown a Jedi then? 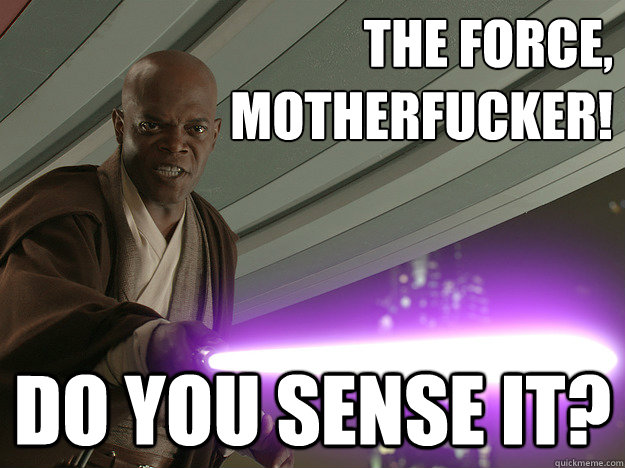 Creates Angriest Characters in the History of Film… Picked to Play a “Peaceful” Jedi.

Episode I, you are the weakest link.  Goodbye.

A new Battle Royale! will be published each Saturday.  Next week I will be pitting Episode III of Star Wars up against Episode IV.  The movies will duke it out until we have crowned a king of the mountain.  As always, I appreciate any comments or feedback… especially if you disagree with my point of view.  Let’s hash it out, bro!