A Memory of Light, the final installment in Robert Jordan’s Wheel of Time, was a battle strewn mayhem that attempted to bind together its over numerous plot threads, character arcs, and themes. The final strokes in a great number of these storylines were masterfully done. However, like any narrative this grand in scope, there were far too many targets to hit that it is only natural several skewed far from the mark. Ultimately the novel brought this grand epic to a fairly satisfying ending, though this book felt like a considerable step down from the previous three.

My spoiler free video review can be found HERE

And my deep dive SPOILER HEAVY video review is HERE

END_OF_DOCUMENT_TOKEN_TO_BE_REPLACED

The thirteenth installment in Robert Jordan’s Wheel of Time series was an overall excellent book with a great balance of action, exposition, character development and plot progression. This balance has been the bane of many books throughout the middle of this series, but since the eleventh installment it has fully returned to form.

My full video review can be found HERE

END_OF_DOCUMENT_TOKEN_TO_BE_REPLACED 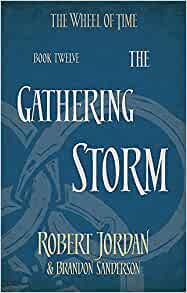 This was an enjoyable read and a further uptick in the overall quality of the series. Following in the footsteps of Knife of Dreams, this book maintained a nice pace and provided a wealth of interesting plot progression. This book also had a good balance of exposition and action, and was perhaps the most satisfactory book in the series for me to this point. With that said, here are my main thoughts about the book:

You can also see the video review of this book HERE.

END_OF_DOCUMENT_TOKEN_TO_BE_REPLACED

After several books of scant plot progression and painfully slow pacing, Knife of Dreams is practically a plethora of concluded plotlines. It felt as if all the main threads of the past nearly four books were gathered up in this installment and tied off in short order. Interestingly, this installment was quite a bit longer than the previous four yet was much quicker to get through because nearly each chapter was a fast-paced rush toward some form of completion. END_OF_DOCUMENT_TOKEN_TO_BE_REPLACED